Every new ECLASS version may feature different kind of extensions and changes to the standard:

This document describes the information how to update an ECLASS classified and property described material master to a new version. In general there are two procedures possible:

ECLASS provides four supporting files to accomplish this goal. The following chapters will describe every procedure in detail, as there are:

Every supporting system consists of a data structure that supports the user to update ECLASS classified and feature described material masters in a more or less automatically way. The basis for this work is also the use of the ECLASS releases, which means the old and new version of ECLASS.

NOTE: The activities ‘move’ and ‘join’ will be automatically applied to already classified material masters. The activity ‘split’ usually needs human decision making to determine within which new class the articles will be placed.

The following information will be not provided, because it can be determined by comparing the previous with the follow up ECLASS release:

A detailed description is to be found under ECLASS Classification Update File.

The Release Update Files (RUF) contain the information on what has changed in one major release compared to the one before. It is a “human readable” collection of CSV files and is only relevant for the basic release. RUF differs between classification and transaction updates. Changes are documented for classes, properties, and all other ECLASS elements regarding modifications, additions and deletions (MOVE, SPLIT, JOIN). RUF only contains modified elements.

A detailed description is to be found under Release Update File (RUF).

The main purpose of Structure Difference Files (SDF) is to update from one ECLASS release to its subsequent release, if these cannot be kept parallel for technical or business reasons. If dictionary releases are kept in parallel the SDF become obsolete. SDF is an XML genericode list for Basic and Advanced of all those identifiers that were changed in a certain dictionary release. SDF shows all elements that have changed or have been added on element level (like class, property, value, etc.), information on the relations is not included.

A detailed description is to be found under ECLASS Structure Difference File.

The Transaction Update File (TUF) contains all information that is needed for a semi-automatically upgrade of valuated productive data. This can be transactional data or a catalogue file (e.g. a BMEcat file) with ECLASS data (class/property/value/unit) that shall be transferred from an encoding with a previous ECLASS Release to an encoding with a subsequent ECLASS major release.

NOTE: If the subsequent release for an ECLASS upgrade is a minor release, than only version upgrade apply. In all cases the Reference algorithm shall be applied.

The TUF is available for ECLASS Basic and Advanced in two different XML files. It includes only information that cannot be obtained by the direct comparison of subsequent structure data releases.

NOTE: ECLASS works on a new edition of TUF, which will be described later.

A detailed description is to be found under ECLASS Transaction Update File.

Such a material master is either available as a property based article database that needs an update to a follow up ECLASS release. Or it is available as an electronic catalog, maybe as a BMEcat, that contains all mentioned information above. For a successful update not only the supporting systems mentioned above are needed, also the two ECLASS releases are necessary, as this is the only way a mapping of the appliances to the article data is possible.

The update process works on article basis, so one article at a time. In the first step the process checks the classification, then the features, and so on. The process is displayed in the following diagram. 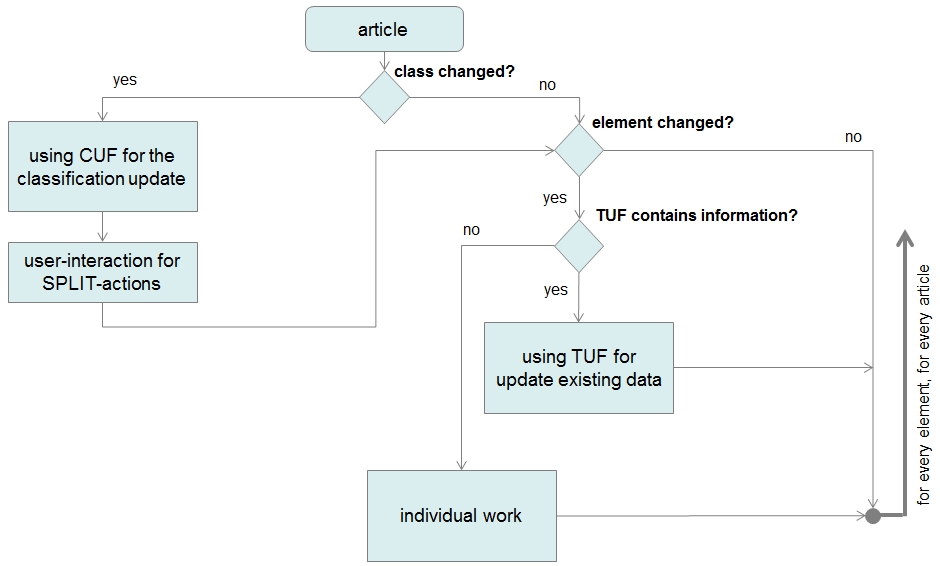 The ECLASS Change Management Rules are transaction data centric and aim at being as simple as possible to maintain and apply.

This means that the decision criterion for assigning revisions / versions / identifiers for structure elements is how the change impacts existing product descriptions (i.e. catalog or transaction data) such that: